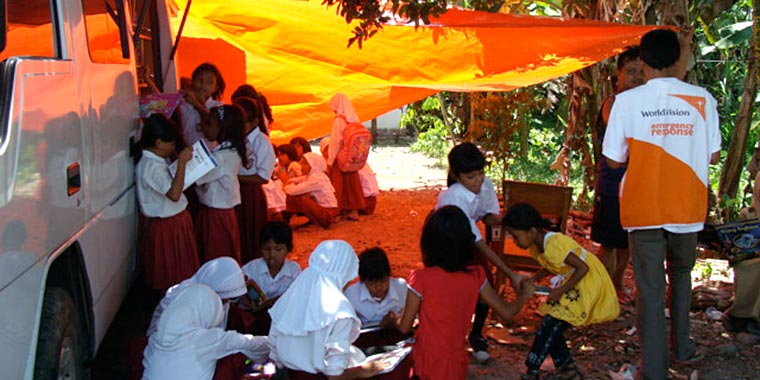 Assessment
We left from Jakarta at 6 am on Thursday, October 15, 2009 and arrived in Padang at around 7.30 am. At the airport, we were met by Mrs. Rahimah, the Chairperson of the AFS student organization and Refki, a student from ITB , Bandung, who had generously offered to be our guides during the duration of our stay in Padang. We drove straight to Pariaman which was a 3 hours drive from the airport and the town nearest to the epicentre of the earthquake, hence, which suffered the most.

In Pariaman we made our first stop at the Indonesian Red Cross camp to update ourselves on the latest information on the area as well as their assessment on the situation thus far. The Indonesian Red Cross had been here at Gound Zero from Day One. Upon our specific request, they gave us a comprehensive list of Elementary and Secondary schools that were either badly damaged or totally destroyed. Helped by Ferry, a member of another NGO from West Java who has been assisting the evacuation of survivors and victims (pulling bodies from buried or collapsed houses), we then combed the Pariaman area and its surroundings following the list provided by The Indonesian Red Cross.

Along the way, we witnessed destroyed private homes, places of worship, schools, hospitals/puskesmas, community centres and local government offices. Most people had refused to move to refuge camps and instead chosen to stay in pitched tents in front of their houses, fearing more earthquakes to come and also wanted to guard whatever little they had left of their belongings. It was heart wrenching to see many houses – that were clearly unsalvageable – being propped up by bamboo poles their owners had placed around them to create some support. It could be partly because they were in denial that they had actually lost their homes or that they were still hoping that by some miracle their houses would stand up again somehow. Many little children were sent by their parents to the street to beg for money with small bowls or boxes. 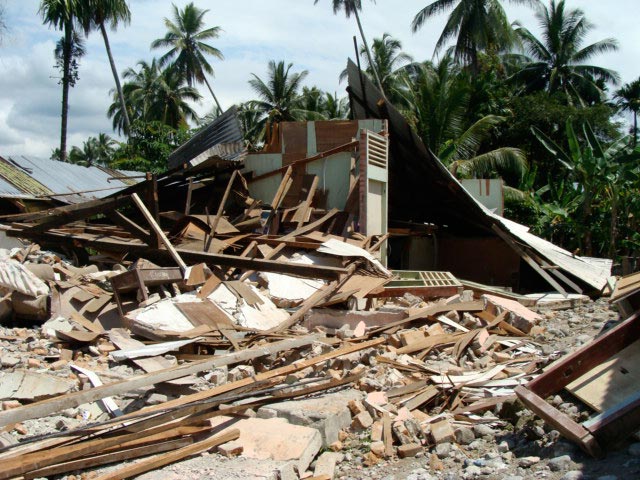 Patamuan District – an area which suffered some of the most destruction
In the village of Sungai Durian, Patamuan District, we stopped by the SDN 04 Patamuan school, which was one of many that had been badly destroyed. Whatever is still standing of this school is not going to stand for much longer. It is even too dangerous to keep these structures standing now. As we arrived, the teachers were just letting the children out as it was too hot to study under the dark blue plastic tents that had been set up as make-shift classrooms. Fortunately, there was a mobile library parked in front of the school and the children were all very excited and fought to be get the first selection of the books. Soon after, they sat quietly under the trees reading the books they had chosen. This was the most heart breaking sight for us to see. This continued for over an hour until the mobile library has to go to its next destination and the children had to go home to yet another tent.

We talked with the head master and some teachers. He gave us a very good impression as being a caring and capable leader who immediately took charge of clearing debris as well as finding out how to get help from the Government. He is determined to start building a better temporary school using recycled wood from the debris and the little money which the Government may give to buy additional materials. This way the children will have more pleasant temporary classrooms to study; not too hot and dark like being under the tent – or wet and muddy during the rains, that now come almost every day.

In this district there are 18 schools (15 Elementary and 3 Secondary) which are now all in the same condition: destroyed by the earthquake. Nothing has been left intact. Each school has around 160 students that have directly felt the consequences of this earthquake.

After the school visits, we went to visit the head of the district (Camat) of Patamuan, Ibu Nurdinah, a lady, which is unusual. She welcomed us very kindly and ushered us into her office where the wall had a big crack on one side and the other side a big gaping hole. The concrete beam above us was broken and was only supported by a couple of bamboo poles. It was very frightening to sit underneath it but she was cool about it, so we did not say anything but followed her cue to sit and quietly pray. It was very clear from her appearance that she was very tired, distressed and overwhelmed by the conditions in her district and its people. This is the single district outside Padang where the casualties are the highest, both in terms of human loss as well as material damage. From a population of around 14 thousand, 269 were dead out of 328 victims, and 55% of 4038 damaged houses were severely damaged.

In between her very busy activities at hand (one after the other people were continuously in and out of her office asking her for directions on what to do), she gave us a quick run down on the condition of the whole devastated area. She recommended for us to visit the biggest landslide where three mountains had toppled together over what was once a beautiful valley of rice field terraces. In the aftermath it had burried 6 villages and over 250 people underneath. None of them survived. She pleaded for us to help with whatever we could to restore the village’s activities so they would not be inactive for too long. She believed that inactivity would adversely affect their physiological condition. At the moment, she is still able to distribute basic foodstuff and a small amount of cash for the daily needs of each family. There is enough food relief at present but the money will soon run out. She is hoping that the central Government can soon distribute the promised cash assistance to rebuild the houses, so they can start getting busy to work on their own houses. This way, life can hopefully return to some semblance of normalcy. 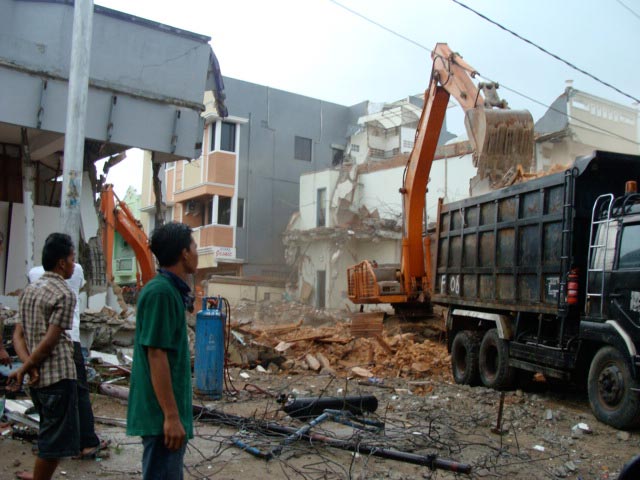 Nagari Tandikat, the three mountains valley.
When drove to Nagari Tandikat, what devastation lay before our eyes! It was a huge area; we had to remind ourselves that there had been 6 villages there prior to the disaster. By the time we arrived, most of the earth piles have been cleared and flattened by bulldozers to try and find bodies and to clear the path for the search and passage for transportation to go through. Standing there looking down on it from above, one could easily imagine the horror of when it was all happening. Around us, there were people still being interviewed by the media; people who were looking for where their homes and loved ones had once been. One couldn’t help but listened to the horrific and disheartening stories. Tears just filled up in my eyes, my heart ached, and I was weak walking back down to our waiting car. As always after this kind of experience, sleep came with great difficultly that night even after waking up at 3 am that morning to catch the early flight to Padang. 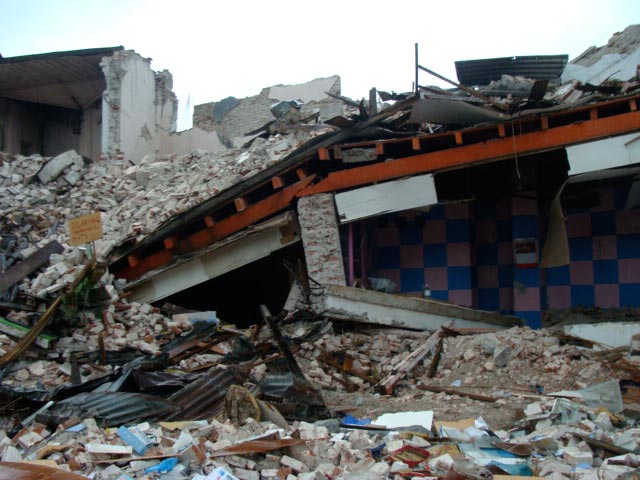 Padang City
We drove around the city of Padang. Images of Aceh and Yogyakarta seemed to replay themselves before my eyes. Big buildings had been flattened to the ground. The damage was tremendous. However, life here seemed to have returned to normal after one week; except of course for hotels, government buildings, houses, schools and hospitals that had simply collapsed and reduced to rubble. The bulldozers were busy clearing away the debris. The roads were already full with cars and other forms of transportation. Schools had resumed classes, shops were open, and business proceeded as usual. The Governor’s office looked busy with people. Many NGOs were there presumably having coordination meetings, which usually is the case at times like this. In my experience, the large International NGOs always first work in the bigger cities. This may probably be because of easy exposure, which is important for their operations, especially when there are also many media people around. There are many schools destroyed here too. However being in big city, these usually will get help quicker, either through contribution from richer parents, NGOs or the local Government.

Titian Mission in Padang
We decided not to spend too much time in Padang, instead spend more time in discussing what action plan Titian could develop to take part in helping. It seems very easy for us to decide where we wanted to help. It could only be in Patamuan District – Pariaman! What would be the most urgent needs, in line with Titian’s mission in Education? These are the following areas which we prioritized:

We are now working on an inventory and logistics calculation leading to a budget proposal for each proposed project. Further to that we will evaluate our human resource availability to run this program. When all of this is ready over the next few days, we shall begin fundraising based on these findings. Depending on the amount of money we can raise, Titian will then select the area of priority which the Program will focus upon utilizing the first available funds.

As soon as it becomes available, we will send this proposal to you for your perusal and consideration. We certainly hope for your generosity and participation in this program by giving your support and donation of whatever possible amount for this very necessary cause. As always, Titian will make sure your donation is used as intended and in the most efficient way.

Thank you for working with Titian to rebuild the lives of the Pariaman District’s children.

Next News →
Pictures from Padang Earthquake