Three Weeks That Empowered Me

It was so humid and blistering outside. Klaten was the hottest place I’ve ever visited in Indonesia—although probably it was caused by the climate change—2019 was the second hottest year in history, according to NASA and NOAA scientists. While carrying a book, I stepped down onto the green grass, bare-foot; the grass covering the Titian’s beautiful garden. There were around twenty teenagers waiting for my presence, all of them seem intrigued, because of course, I was a stranger which was interesting for them. They were all sitting on the grass field, wondering what comes next. Nurul Liza, the coordinator of Community Learning Center at Titian, gave me a warm welcome, and then she let me lead the discussion. “Hello,” I said. I kept my eyes staring at each of them and put on a huge smile. After explaining a bit about myself, I asked them, “Who are you?” Right after that, each of them introduced themselves by telling me their names, homes, and high school names. 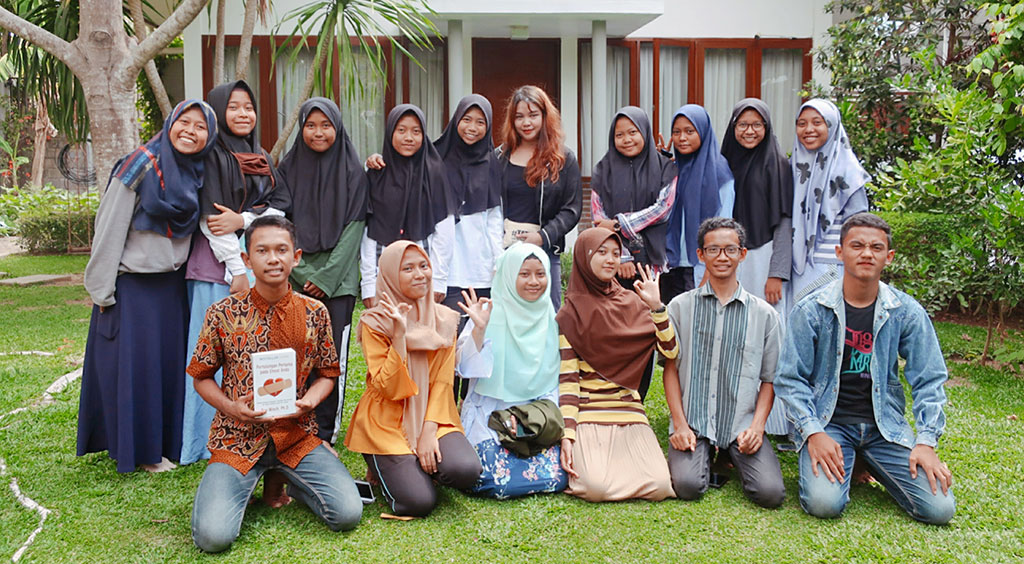 There were three boys and the rest were girls, with an approximate age of sixteen years old. Not all of them were Titian scholarship awardees, there were also some teenagers living around the Paseban, Bayat area. On that day, I was excited to give them an insight about socioemotional literacy based on Guy Winch’s bestselling book, ‘Emotional First Aid’. Days before, I tried to summarize and comprehend the first two chapters of the book: Rejection and Loneliness—after realizing that both chapters are so easy for youngsters to relate to. Those teenagers were very eager to ask questions about alternative ways of how they cope with their life, especially aspects that related to rejection and loneliness. Then, I presented them with my opinion and interpretation of the book.

My first excitement increased once they started asking so many unpredictable and detailed questions like, ‘How to prevent prejudice?’ or ‘Is it possible at my age to help a friend solving their personal problems at home?’, and I was really awed by it. I postponed answering one of the questions, because I have not done any research regarding the subject of the question; and a Titian staff, Nisa’u, was impressed because of how I handled it. Nisa’u is one of the alumni of Titian Scholarship Programme who became one of Titian’s staff members. She now focuses on the alumni management of Titian. The feeling was mutual: I was impressed at Nisa’u’s reaction as well, because she showed such a nice and keen gesture by blatantly saying that she learned something from me, and of course, I learned from her and all the teenagers present, too. Since that particular case, I understood that most of Titianers (‘Titianer’ is a word used to describe Titian scholarship recipients) appreciate small things and also learn small things from everyone they meet (I also witnessed similar things in the days after). Nurul Liza, the one who assisted me most with Titian’s literacy programmes, is also a Titian alumni, and now she ignites the light of literacy at Titian Bayat’s library. She has the big responsibility to encourage the kids and teenagers to read more books and she is a book reader herself.

After that day, the reel of activities never stopped. Some of the teenagers were curious about the books I published in the past few years. Then, I agreed to give them sharing sessions about my books and the story of being a writer and also a community founder. We had that particular session twice; one session at a Junior High (SMPN 1 Bayat) inside the Abisatya Library (this library was also reconstructed and developed by Titian Foundation) and one in CLC Titian Bayat. When I conducted a sharing session in SMPN 1 Bayat, I was quite surprised when a teenager sat in the back row owned one of my books and asked me to sign it. 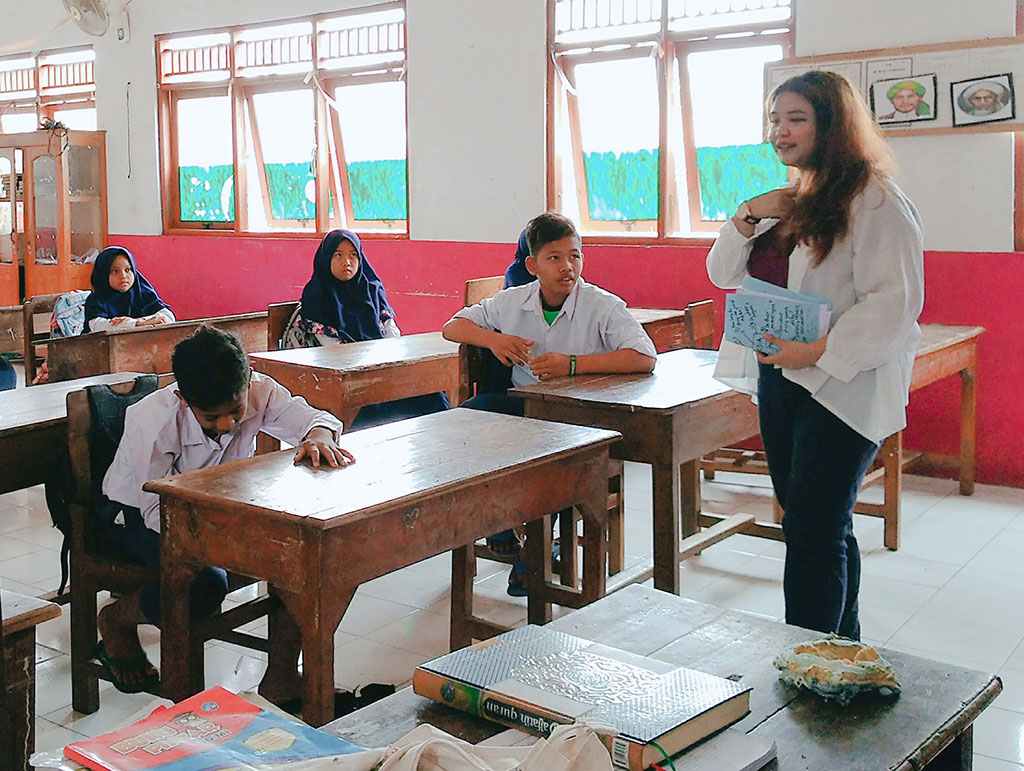 The activities I undertook in Bayat were all spiritually fulfilling. I talked with the teenagers of senior high coming from different schools every day, when I got a chance in the afternoon (when they got back from school) in the Community Learning Centre. They often visit the CLC building to learn, finish their homework, or just hang out with their friends. Happily, I made some new friendships with them; it’s not just because I was a volunteer, it’s because we had built trust between one other to exchange knowledge and build a true friendship. I inevitably felt that they had a strong willingness to develop during my interactions with them.

The Titian scholarship awardees have a regular gathering in every Sunday (that’s why they name it ‘SG’ or ‘Sunday Gathering’, where they could have some new knowledge from various sources presented by the competent staff, volunteers, or guests. I had an opportunity to give three generations of scholarship awardees (around 200 teenagers) some insights about the use of social media. Days later, I and Nurul Liza visited an elementary school and gave a short class about social media for kids. For the pre-school students, with Nurul Liza, we also visited the school and read them interactive books. After spending weeks in Bayat, I also got a chance to visit Titian Kaliurang for just a night. Even though it was a short visit, I feel fortunate that I still had a chance to have a sharing session about the process of becoming a writer and how important literacy is. 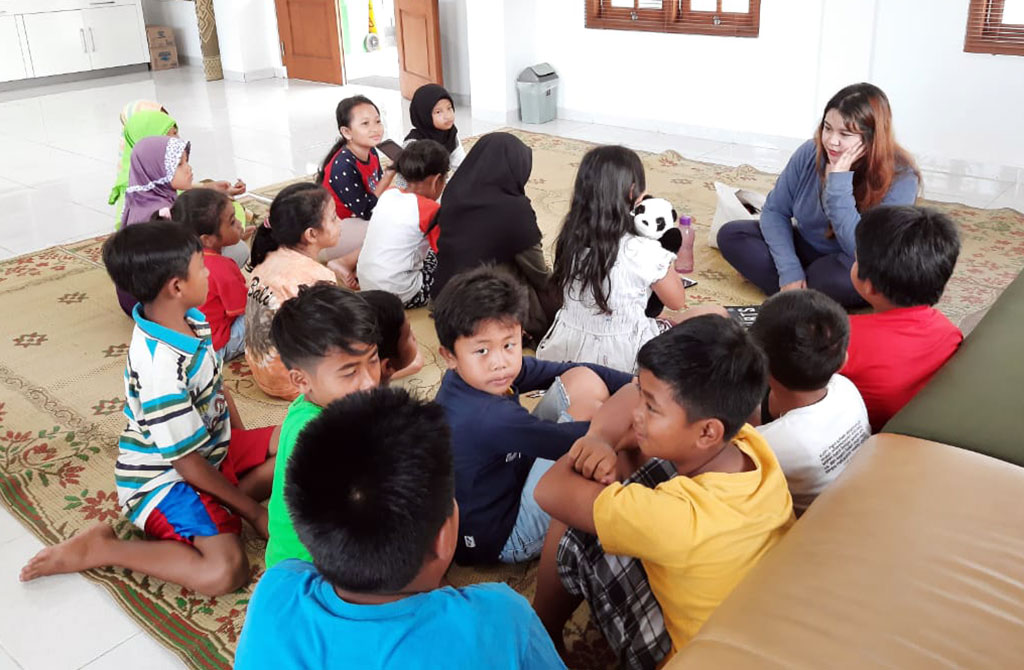 Never in my life would I have imagined about how a place in the middle of a village could possibly empower so many people in the community. From my perspective as a volunteer, Titian Bayat is so enriched by lots of intellectual activities. I felt that that my cognitive and creative abilities were used and developed every single day I spent in that place. Once I woke up, I knew that there were lots of new things that I could learn and explore in Titian Bayat, even small things. I am always fascinated when I recall my memories the first time I interacted with those kids and teenagers. Being involved with Titian made me double-highlight the fact that all of us humans are equal; we are all having the same brain capability, we are struggling together in figuring out how to survive life and living life to the fullest. Being a volunteer with Titian taught me to work both with heart and mind, it is somewhat inexplicable; definitely one of the life lessons that more people should try.

Once I got home, I thought I would cry, but apparently not! The reason was obviously because I knew that those kids and teenagers I had met in Bayat and Kaliurang are in good hands—Titian provides a bridge for them to lots of knowledge and opportunities and Titian also ditches the stigma that education is a privilege. Education is for everyone. Well, there should be more places like this! (SL)

Next News →
A Teacher That Students Missed