That night, residents around Kombal Bay were still seen doing their activities. At around 8 pm WITA, after the residents had completed their Isha prayer; Hilmi, a resident of Kombal Bay, had just finished having dinner with his wife on the terrace of their house. Suddenly there was a shock that certainly made Hilmi and his wife wary. “There may be a big earthquake in Sembalun,” said his neighbor. When Hilmi went to his other friend, looking for information, there was a tremendous foreshock—big shock that made a horrifying-eerie sound. The location where Hilmi lived was immediately pitch dark, there was a total power outage. Like a nightmare, he saw glimpses; that all the houses were leveled and even the dust covered the normally visible stars in the sky. The ground, which initially looked solid and sloping, opened a very wide crack even people’s feet could enter it.

At the same time, Hilmi immediately was alerted of his beloved child who was with his uncle. He was so relieved to know that God was still protecting his three-year-old child—his child was found under the rubble—the child was saved because the child had been ‘thrown’ by his uncle’s left hand although the uncle’s body was already got hit by the rubble. Almost all houses were flattened, many residents were hit by shards of glass coming off from the window frames of shattered houses. Due to the cracks in the ground, the water beneath the ground rose and gushed upwards like fountains. All residents who lived around the coast ran to the top of the hill and those who remained on the ground ran fast as far as approximately 500 meters. Not only that, some aftershocks occurred repeatedly. Hilmi had felt so appalled and he felt ‘blank’ yet his instincts immediately started hitting in seconds. He avoided the building and tried to calm his wife down, then he and his family ran to a refuge in the hills.

As an active citizen in community organizations, he assembled the young people in his village to help. Hilmi was very worried because he had not found her mother. When they arrived at the refuge, several motorbikes had to be turned on so they could get the light. No one was able to close their eyes for a long time, no one could sleep until dawn because they were afraid of another shocks. Right when Hilmi felt capable enough to walk, he went down to look for her mother, and finally he found her walking on the main road.

Taking her mother to the refuge, Hilmi took the time to bring a mattress from his village which is 500 meters away. The other refugees including himself had not been able to eat. Then, they took the food stock that was saved from their respective homes by forming a team to enter the village. How did they clean themselves? There was only one water well in the refuge and it was located 300-400 meters from the refuge location.

The next day passed with mourn because they had to carry out a funeral and after that they gathered with the Head of the Village to coordinate. Hilmi was appointed as the deputy head of the refugee camp. It turned out that there were 1,000 people in the refuge where Hilmi was temporarily staying. Refugee farmers who had dried rice and corn in their respective homes were asked about their tarpaulins whereabouts so that the team could take them. Not only that, other refugees have also asked to donate bamboo so they could build refugee tents. Whenever being asked to help, the young people in the refugee camps must be ready. About three days after the tragedy, people from outside Lombok began to arrive, there were teams from volunteers and television.

Five days passed and most of them had not been able to take a shower. The next solution: taking loads of river water near their village using a water pump owned by the farmers. The water was filled in big barrels and then they borrowed a pickup from a nearby hotel. In refugee camps, they distributed water by transferring water into many gallons—a drop of water meant a lot to them. 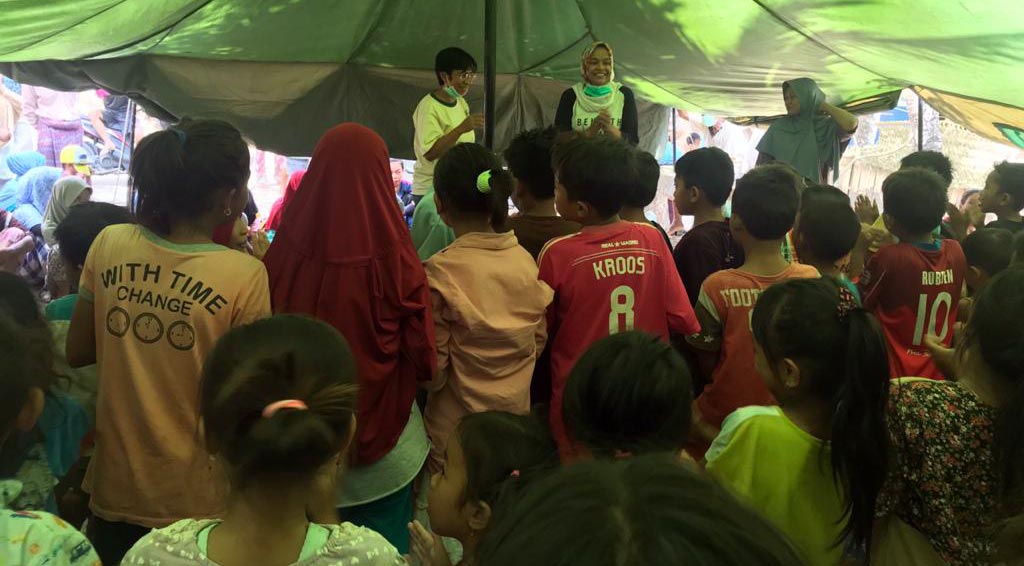 About two days later, Hilmi met Mrs. Lily, the CEO and Founder of Titian Foundation. At first, Mrs. Lily asked where the nearest refuge was, to one of the schools in Pemenang, SMP 1 Pemenang. The informant advised Mrs. Lily to visit the refuge located near Hilmi’s village. When she met Hilmi, she asked what they could do to help, then Ibu Lily asked Hilmi to get connected with a disaster relief organization, ACT. At the next meeting, their conversation was getting more serious. Ibu Lily asked again what Titian could do to help. Hilmi immediately conveyed that the children in refuge had not been able to return to school. Finally, an emergency school was created in the refuge which also carried out trauma healing activities in it. They also got refugee tents from Soroptimist International of Jakarta. 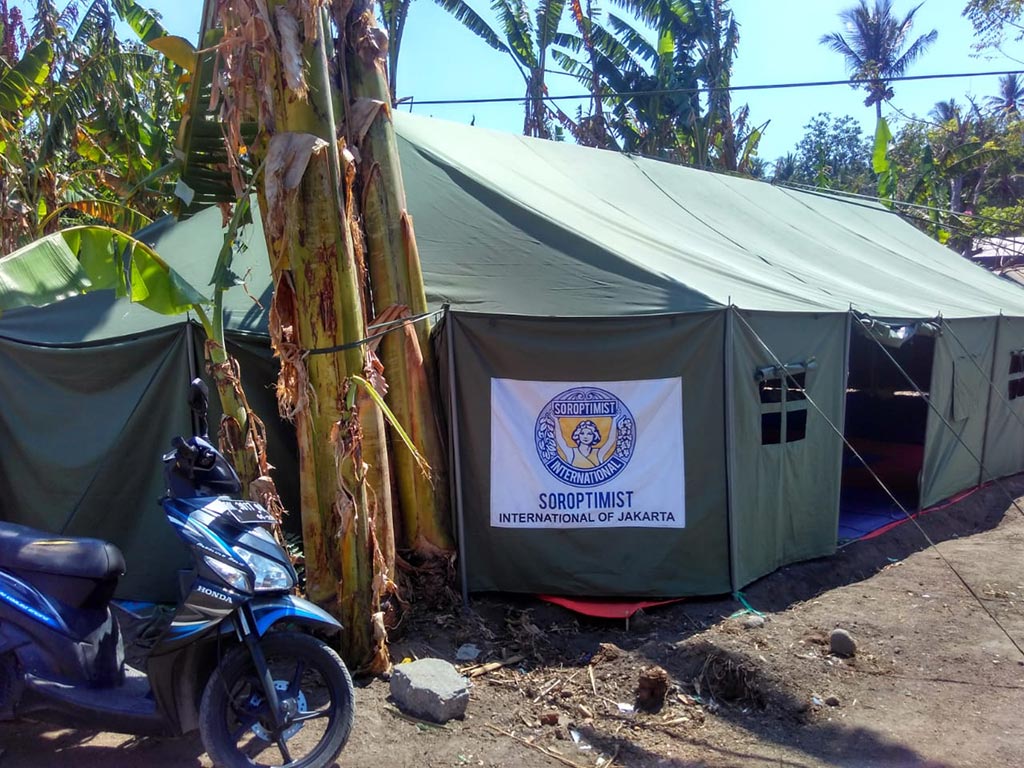 Titian also provided large cooking utensils because the refugees had difficulties when they had to cook in large quantities, even in other villages there were clashes because they had to fight over food. After a month and a half, the refuge was closed because the area became slum and the refugees started to get sick. They moved back to their village and built temporary tents around it because their damaged and destroyed houses had to be completely demolished to be safe in case of aftershocks. The remains of the building were built for temporary housing. Most of the residents stayed in the north for a year and a half. The impact of the disaster and its management practices on the mentality of the victims still exists today. Problems persist, some residents still have the mentality to depend on other people’s help. Seeing a situation like this, Hilmi believes that education needs in Lombok has to be ‘tightened up’. 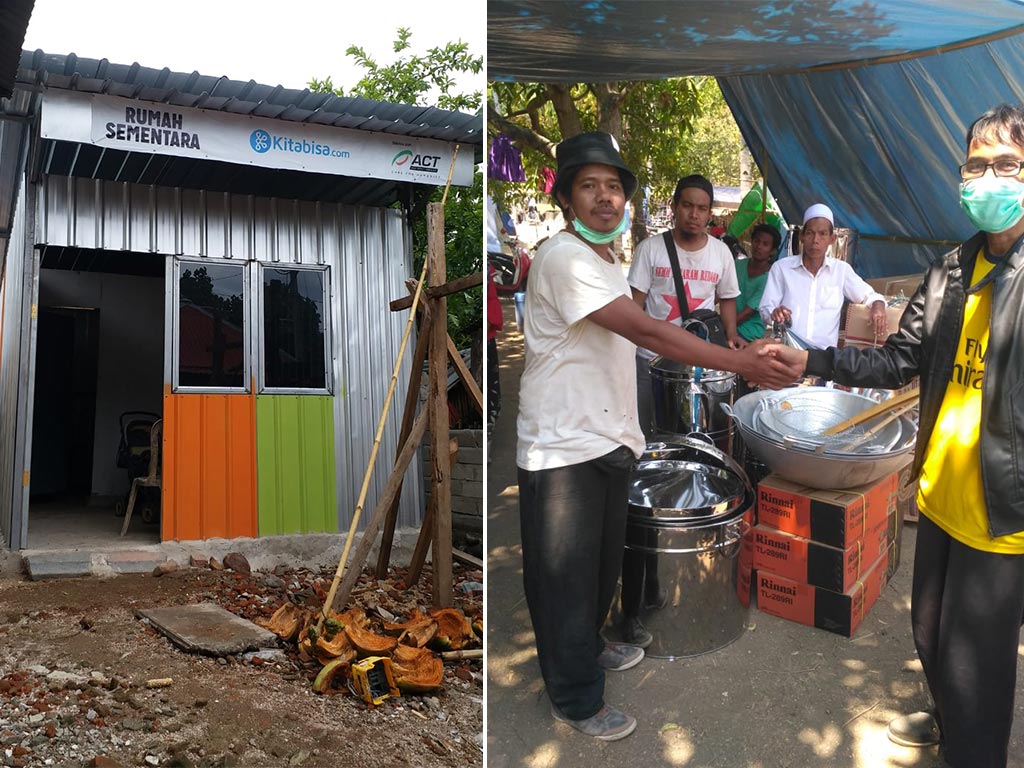 The 2018 Lombok Earthquake incident which even became the world’s attention provided a big lesson for all Lombok residents. For Hilmi, this event will not be forgotten and he loves Lombok even more. Now, he wants to channel his love for Lombok by prioritizing the advancement of education for young people in Lombok. His dream to continue his education has come true now, it’s never too late to get an education—the world of lectures has just begun. By continuing to work closely with Titian, he hopes that his dream to develop his birthplace can happen. Lombok must rise.

We can help you to contribute to Rembitan. Click here.

Next News →
Breaking the Myth: From Lurik to Songket