They Have Rights to Dream

Most of them got married because they had no other options. There is no reference on careers, goals, and life targets other than what they have learned in their own surroundings. In their point of view, getting married at a very young age is something common. Early marriage is an issue which has become the government’s duty to eradicate. In Lombok, there are so many clashes of tradition when it comes to early marriage, and this makes the chain of problems continue: economic problems erupt when so many people get married at a young age and in the end one family head has to bear the costs of the newly wed, especially if the couple has children. This common case in Lombok has not been widely exposed by the media.

Child marriage clearly hinders the achievement of HDI (Human Development Index) and SDGs (Sustainable Development Goals). SDG point 5.3 targets the global community to eliminate all harmful practices, one of which is child marriage. According to the Indonesian Ministry of Health, fifty-three percent of married children (under the age of 18) suffer from depression. Gender issues have also generated from child marriage – this is continuously ‘supported’ by the existence of a strong patriarchal culture, gender biased policies, and the mindset that girls are ‘a family’s property’ – they do not have the right to negotiate. Based on the data presented by Rohika Kurniadi Sari, Assistant to the Deputy for Fulfillment of Children’s Rights, through an online socialization held by Bappenas this month (Indonesian Ministry of National Development Planning), the Indonesian government in the 2020-2024 RPJMN (National Medium Term Development Plan) has targeted a decrease on child marriage cases. In 2020, the government projects that child marriage occurred around 10.19%, while the target is to decrease by 8.74% in 2024 and by the time the SDGs end, the figure is expected to fall to 6.94%.

Talking about Indonesia’s 1974 Marriage Law—there’s a part that says, ‘…forming a happy family and household…’ and this is certainly contrary to the majority of the fact that child marriage does not generate ‘happiness’. Children who are certainly not ready and still in their immaturity state would not been able to define nor implement things that can make themselves ‘happy’ in their marriage. To stop this problem, of course, the chain must be broken. If not? Their descendants will repeat the same story. Their circumstances could be the same or even worse.

According to Komnas Perempuan through an online session organized by Soroptimist International of Jakarta this month, prevention of child marriage is included in one of the 5 Presidential Directives to the Ministry of Women Empowerment and Child Protection. No wonder if the spread of education is one of the solutions to prevent early marriage. The government has also committed to solve this problem as part of the achievement of the SDGs which is targeted to be completed by 2030. The consequences of child marriage are enormous such as inadequate education, declining economic conditions, domestic violence, maternal death, infant mortality and stunting. Those are things that should be underlined.

In Rembitan, Lombok, where the CLC Titian Foundation is located, there are still many concerning cases of child marriage. For the similar reason, the community is currently still practicing it without knowing the long-term impact that could happen in the future for them. In fact, divorcing at such a young age is not a peculiar thing there. Aside from the various consequences that have been mentioned above, mental health problems are certainly rising. A child who has not finished studying and playing suddenly has to face the fact that she ‘must’ be a wife who is expected to carry out the stereotype of ‘duties of a wife’ stereotype: getting pregnant, raising children, preparing all things that must be served in a house. In fact, most of those who marry at such an early age are those who end up becoming a burden to their parents: still living in their parents’ house and remaining a financial burden. It doesn’t solve anything.

Actually, the situation has ‘improved’ at the end of 2019. With the consideration of policies from the government, the number of age for legal marriages in Indonesia has increased from 16 to 19 years old. This regulation will indeed make it difficult for them to carry out legal-registered marriages, but it’s not the end of the challenge. There is still another loophole for them to tie the knot: ‘religious-based’ marriages or ‘underhand’ marriages. This shows that grassroots movements and NGOs are still very much needed to encourage the growth of people’s mindsets. If regulations cannot control, then various approaches and outreaches related to education are the ‘soft power’ that must be sharpened to alleviate this problem. Embracing and assisting the community to completely understand the problem will create a way more sustainable and long-term impact. 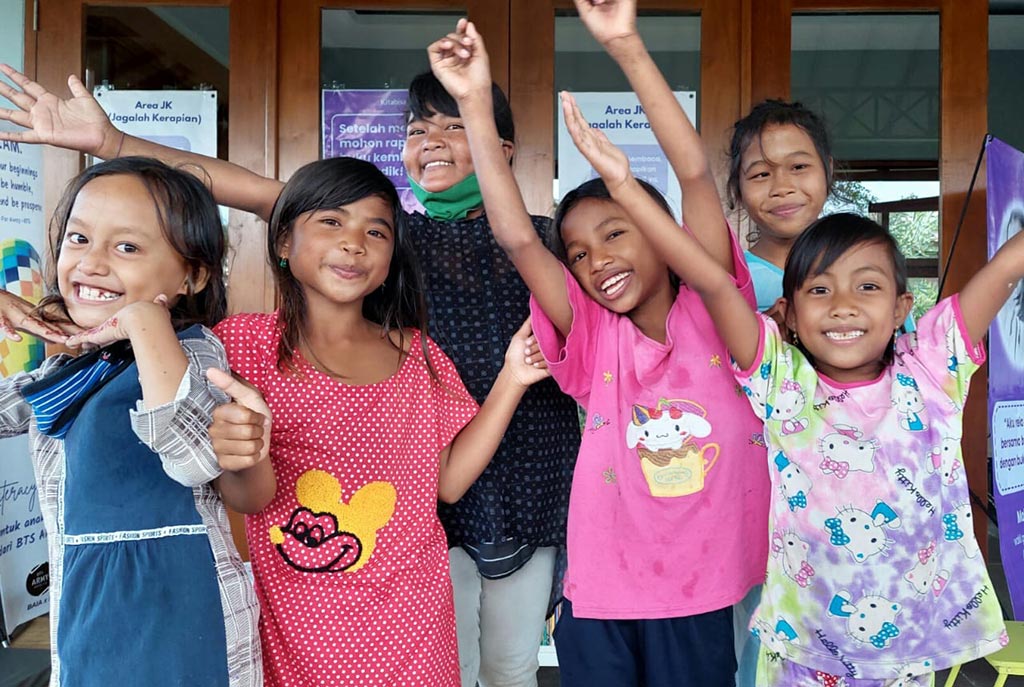 Raising the level of the society’s awareness is certainly not something that can be carried out in a short period of time, but it is crystal clear that a movement initiative must start immediately. In accordance with its main mission, the existence of Titian in Rembitan is an attempt to empower the community through education. Through various dialogues between staff and community members as well as literacy sessions held in Titian, they can gradually be educated and motivated to find out about the consequences and dangers of early marriage if it is still being implemented in their lives, especially for the lives of the generations below them. Family is the smallest unit of society therefore all components in one family must be empowered through education and the provision of sufficient information.

By providing education through various activities at Titian, the community members can get information and new knowledge about their dreams and the rights they actually have. There are various options of life choices. There are other alternative ways to live. Getting out of their shells to explore the outer world is possible. With the help through education, the cognitive abilities and critical thinking of the community members will be exercised. Though at the end the choice of how people live their lives is a personal choice, we know that they have full rights to knowledge and they have full rights to progress.

← Previous News
Breaking the Myth: From Lurik to Songket

Next News →
Princess Mandalika and Consensuality