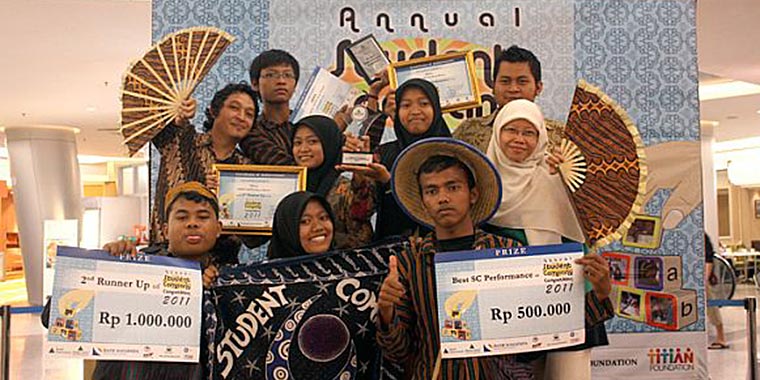 On 23 – 24 July 2011, SMKN 1 ROTA Bayat participated in the Annual SC Fair held in CityWalk, Jakarta, under the company named AKIRA. Akira was a tremendous success in this event and awarded as Best SC Performance and 2nd Runner Up, with the highest return amongst its ‘big city cousins’ competitors. This is the second time Student Company from SMKN 1 ROTA Bayat won the Best Performing Student Company.

Last year SC Sakura of SMKN 1 ROTA Bayat also participated in the Annual SC Fair held in Plaza Semanggi, Jakarta. As a first timer, Sakura also won for The Most Active Student Company. Not only did they make a healthy profit, they were also rewarded for their efforts with prize money.

Titian Foundation has signed a MoU with Prestasi Junior Indonesia (PJI), an alliance of Junior Achievement (JA) Worldwide, Colorado – USA in June 2010, for the implementation of entrepreneurship curriculum in SMKN 1 ROTA Bayat, Klaten. The MoU includes the establishment of Student Company (SC) and participation in SC Fair in Jakarta.