Breaking the Myth: From Lurik to Songket

The presence of Titian Foundation is something new for Rembitan society, especially for Nyanggit community. Not only constructing a new building, Titian also brought new programmes for them, such as hygiene and sanitation, literacy, and community empowerment. One of the main programmes is songket weaving.

Collaborating with Soroptimist International of Jakarta, we introduce songket weaving as a new challenge for us. It is not only about introducing the Nyanggit weavers to new pattern and weaving process, but to change their mindset toward the myths spread among the societies. Songket weaving comes and grows from the neighborhood village, Sukarare. The people believed that if they learn to weave songket, bad things will happen. The whispers spread in the air of Nyanggit, showing how they were afraid and worry about being blind or crazy if they continue the plan to study and weave songket. However, it did not stop the thought of having a better life condition. Ibu Aminah is the first person who broke the myth and decided to start studying the songket. “I thought by improving my weaving skill from lurik to songket will increase my income to provide my daughters’ school needs. Ibu Lily’s motivation words and I believe that everything would be fine pushed me to learn songket,” said Ibu Aminah. This faith later on inspired other weavers to participated in the learning process. 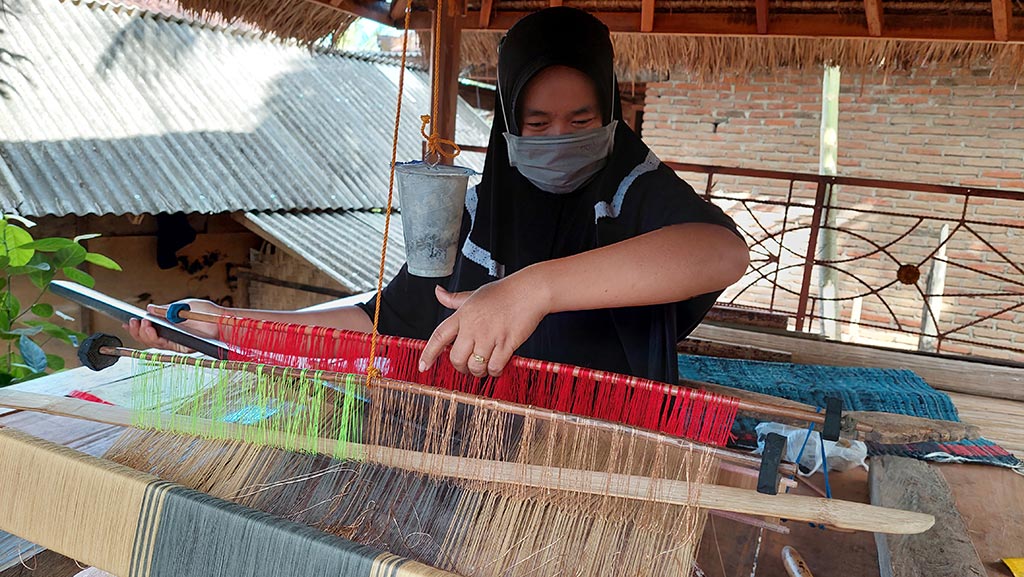 The fact that songket course does not bring any harm to the weavers, they do not go as the myths told them, everyone is getting relieved. Instead, it brings many benefits so then one by one they started following Ibu Aminah and the first group to learn songket. As time goes by, the class is not only followed by Nyanggit weavers but also other from neighborhood kampongs. Working on songket was hard for them indeed, besides the pattern is more intricated and longer time consumption they also have to learn and adapt from the beginning. However, it was not a big deal for these learners, instead now many weavers are in queue to be able to join songket class. Until this day, there are already four weaving groups joined the programme and consisted of 19 members whom most of them are married women. 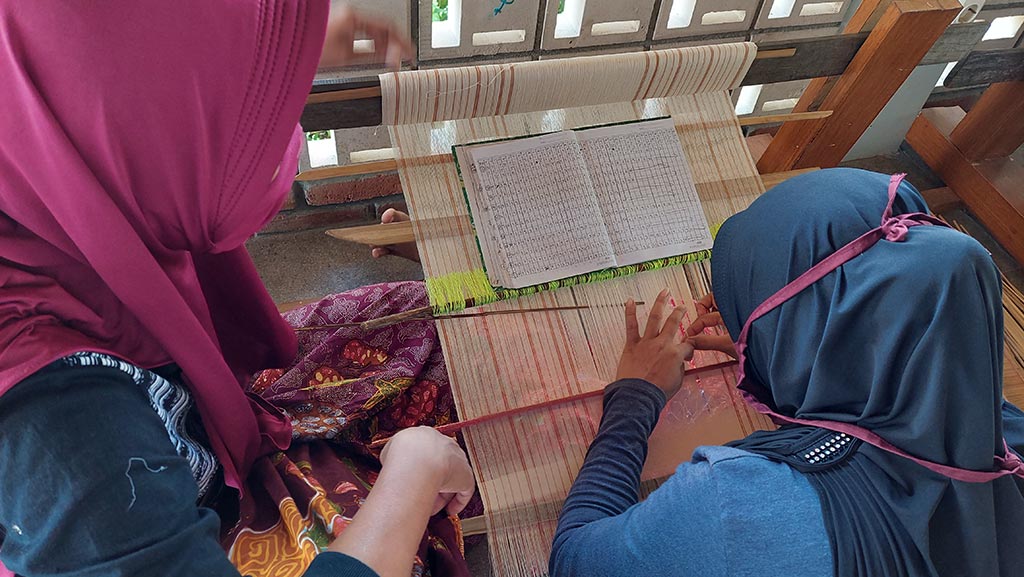 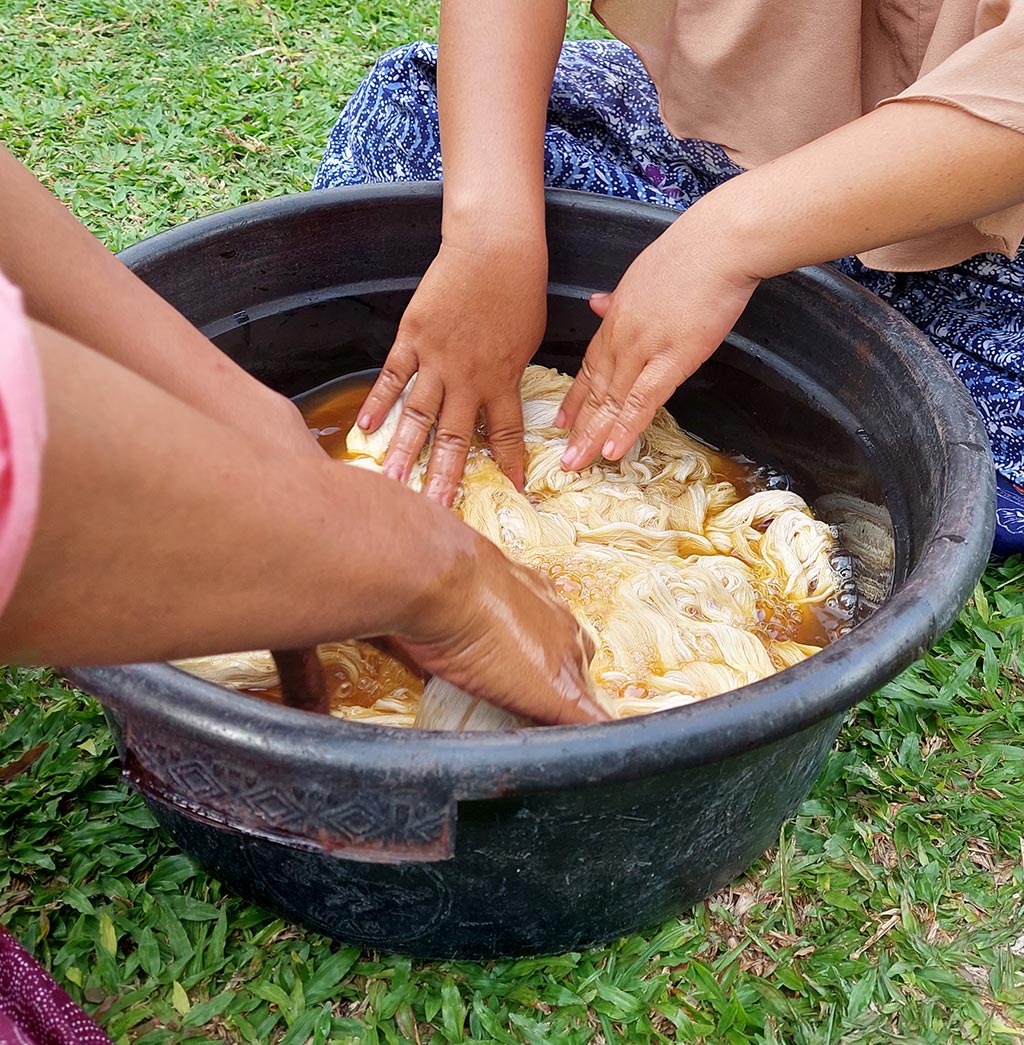 The weaving class programme is having a significant progress. At the beginning, Rembitan weavers were only able to weave simple patterns, commonly checked and striped ones, resulted from three or more color combination, such as: Kembang Komak, Tapuk Kemalo, Selulut and many more. However, now they are capable of producing and creating more beautiful and intricated patterns. Importantly, they do not keep the knowledge for themselves. They share it to the other weavers. While the first class get the trainer from the native weaver from Sukarare, now the new members learn from their senior, the members whom able to weave well. Moreover, Titian’s staff also participates in mentoring the process such as producing natural dye, color and fabric selection, and production control. 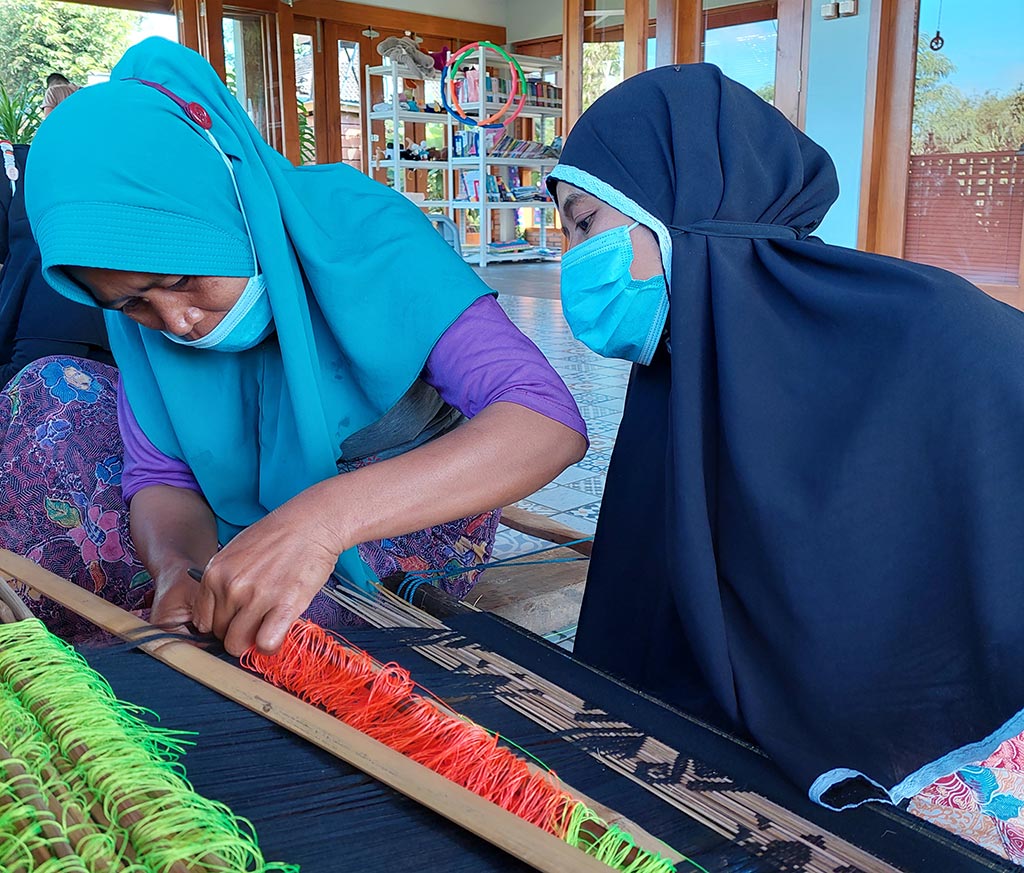 Furthermore, Titian Foundation’s staff also contributes to guarantee the sustainability of this programme, started from providing the fabrics as the capital and creating the marketing system to assisting at financial management. Titian with the members of the weaver groups have collected mini treasury which consisted of fabrics and other needs to start weaving used as the capital. It is used to ease those who want to start weaving songket but have nothing as the capital. They can pay the fabric they used after they sell their products. In order to develop their ability at managing their finance, Titian staff also provides trainings and assistance through financial literacy.

In the end, it does not only stop at the songket training. Titian team also contributes at increasing the value of songket products by collaborating with the members of ex-Sewing Class members. Kanggo Project is the name of the group which is formed by the alumni of Sewing Class. Consisted of four young women and assisted by Titian team, they produce ready-to-use products such as pouch, bag, mask and many more by combining weaving products. This project runs in order to utilize and improve their knowledge and skill they have learnt in Titian, so it can increase their life prosperity, both for the sewing and weaving group. In addition, they keep on maintaining the sustainability in assistance and training, especially the assistance related to entrepreneurship and financial management. (NL)

Next News →
They Have Rights to Dream